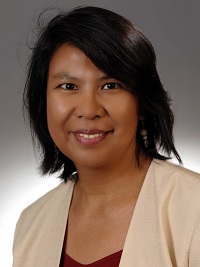 I am the Interim Assistant Vice Chancellor for Academic Affairs and Director of USCB International Programs as well as the USCB Beaufort College Honors, while teaching as a full professor of French, Spanish, and Global Studies. From 2007-2016, I was Chair of Humanities/Fine Arts. In 2012, I received the Carolina Trustee Professorship 2012 (UofSC Board Trustees) and in 2010 I was awarded the South Carolina Governor’s 2010 Professor of the Year. My past leadership roles include Program Director - Liberal Studies, then for Spanish. My graduate degrees are from the Université de Paris-IV Sorbonne (Magistère), the Instituto de Cooperación Iberoamericana i (Diploma de Profesor), and the University of Cincinnati (MA and PhD - French Literature).

MA in Romance Language and Literature. University of Cincinatti 1989

BA in European Languages. University of the Philippines 1986